Can A Child Be Born With Cancer? 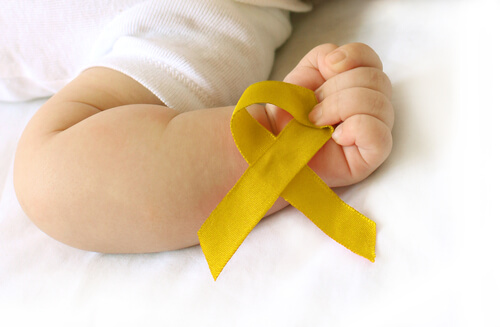 When you’re preparing to welcome your child into the world, a critical illness like cancer is something that would hardly cross your mind. Such news would certainly be heartbreaking for new parents. Knowing that the occurrence of such cases is extremely rare is, however, comforting. But while a child being born with cancer is certainly uncommon, it does take place.

Florida-based Erjona, who’d had a smooth pregnancy, sailed through an uneventful delivery on January 28, 2015. However, the new mother and her husband were shocked to discover that their daughter Melissa was born with a fever of 104 degrees. Her tiny body was marked by blue bruises. Her white blood cell count was much higher than the normal range. A week of medical tests later, the new parents learned that Melissa had acute myeloid leukemia (AML).

AML is a kind of cancer that begins in the myeloid cells, which typically go on to form WBCs, RBCs, and platelets. It’s a rare form of the disease, but it progresses rapidly. Like Erjona, many new mothers are often shocked to discover that babies can be born with cancer. It’s not a possibility expectant mothers want to consider. However, it’s the grim reality.

What causes a baby to be born with cancer?

Various factors may contribute to the development of congenital cancer. While the research on this is still unestablished, scientists agree that gene mutations are the foundation of cancer in newborns. These mutations can be hereditary or acquired.

1. Hereditary gene mutations – These are mutations in the genes that newborns inherit from their parents. Genetic mutations may increase the risk for certain types of cancers. It’s possible to test for inherited DNA changes by extracting blood or other body cells.

It’s not known what causes these acquired mutations. Some errors in DNA replication may occur because of external factors like exposure to radiation. Others may be caused by random events occurring in the cell.

Can cancer in fetuses be detected before birth?

The answer is both yes and no. Some cancers can be identified during routine ultrasounds. Unfortunately, others might remain undetected until the baby is born. Advanced healthcare offers diagnostic options like in-utero MRIs and biopsies when needed. These techniques can help if a neonatologist suspects that the baby may have developed cancer in the womb.

The most common cancers in newborns

Infants typically tend to suffer from one of these four types of cancer.

What can new or expecting parents do for the health of their baby?

Acquired mutations are beyond human control. So, it’s not possible to prevent babies from being born with cancer. Fortunately, there are some things expecting parents can do to salvage the situation.

1. Pay attention to the signs – Expecting mothers should pay attention to their bodies. In case there’s the slightest sign that something doesn’t seem right, they need to bring it to the notice of their doctors, so timely action can be taken.

3. Ask questions about the details – In case they have any doubts or queries, parents of newborns with cancer need to clarify it with their doctor. Taking refuge in other sources of information could do more harm than help.

Obtaining a health insurance cover is easier now, with many insurance service providers offering details of their policies online.

Congenital cancers do occur. Nevertheless, they are still rare. Cancers developing in the duration between the prenatal period and up to 3 months of postnatal life make up only 1-2% of pediatric cancers. Considering how rapidly cell division occurs during this phase, it is a marvel that genetic mutations aren’t more common.

And in those rare cases when a baby is born with cancer, modern medical treatment options can often cure the disease. Take Melissa’s case, for instance. She received chemotherapy soon after her diagnosis. Her acute myeloid leukemia responded well to the treatment she received. And after six months of chemotherapy, the newborn went home cancer-free. With oncological research progressing quickly, newer treatments might be just around the corner. Once established, they could improve the prognosis for newborns with cancer even more.