Live free, when you

are secured against cancer

*Premium including taxes of 30 years old non-smoker male for lump sum cover annual pay options for a policy term of 10 years with a sum assured of ₹10 lakhs.

Getting diagnosed with Cancer is really heart breaking, and because of our lifestyle and surroundings, the risk of getting Cancer is on an all-time high. Cancer cases in India is skyrocketing and nobody is safe. The most demoralizing part about Cancer is that it not only affects your health but also puts a major burden on your financial status. However, the financial burden that you face can be eased with the help of a Cancer insurance. A cancer insurance policy by Future Generali will help you stay financially and psychologically secure in case you or a family member of yours is diagnosed with Cancer.

a) Minor Stage Cancer benefit shall be payable once during the entire life of the policy including its renewability for Cancer of a particular organ.

b) Maximum 4 times Minor Stage Cancer benefit is payable upto a maximum of sum assured, for separate organs, in the entire life of the policy including its renewability.

c) The policy will terminate once the Sum Assured is exhausted.

d) Sum Assured shall be highest of the following:

$ Not applicable for single premium plan.

Benefits of Our Cancer Protect Plan

Free Look Period: In case you disagree with any of the terms and conditions of the policy, you can return the policy to the company within 15 days (30 days if policy is sold through direct marketing mode) of its receipt for cancellation, stating your objections. Future Generali will refund the policy premium after the deduction of stamp duty charges, medical expenses, if any and proportional risk premium for period of cover, if any.

If the Policy is opted through Insurance Repository (IR), the computation of the said Free Look Period will be as stated below:-

The policy acquires a Surrender Value immediately after payment of single premium. The policyholder may terminate the policy anytime by surrendering the policy for a surrender value.

For single premium option, surrender benefit is equal to single premium including extra premium for substandard lives, if any (exclusive of Goods & applicable Tax) multiplied by guaranteed surrender value (GSV) factor as given below:

You get a grace period of 30 days for annual mode / 15 days for monthly mode from the premium due date to pay your missed premium. During this grace period, you will continue to be insured and be entitled to receive the benefits. If a valid claim arises under the policy during the Grace Period, but before the payment of due premium, the claim will be honoured. In such cases, the due premium will be deducted from the benefit payable.

The Premium(s) paid by you are eligible for tax benefit as may be available under the provisions of Section(s) 80D as applicable. For further details, consult your tax advisor. Tax benefits are subject to change from time to time. 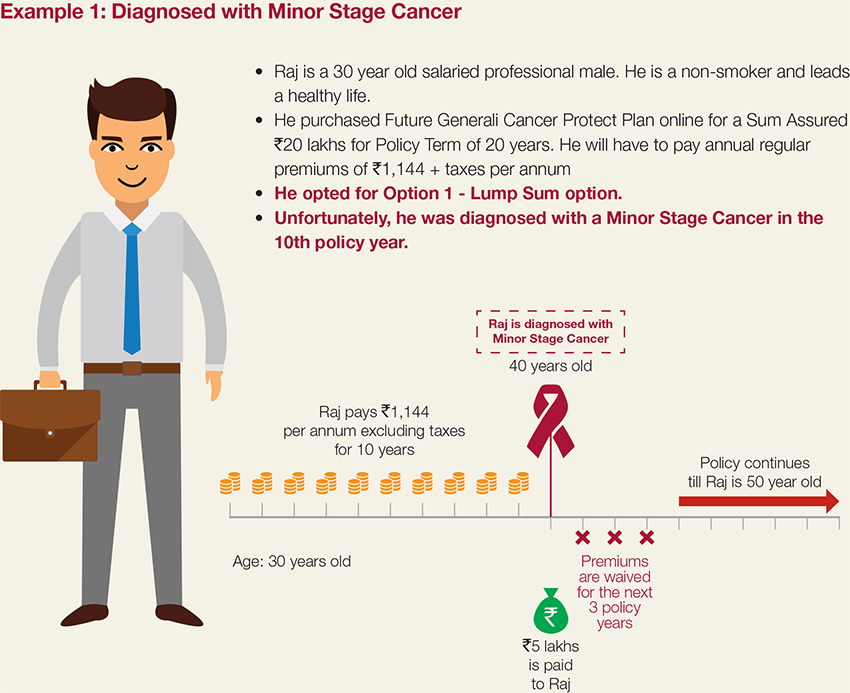 How can you buy Future Generali Cancer Protect Plan?

Applying for Future Generali Cancer Protect Plan is extremely easy. Simply go online and get yourself a Cancer insurance plan cover just with the help of few simple steps. The process is extremely hassle-free and quick.

No benefit is payable under the Plan for any Minor stage Cancer, and Major stage Cancer, resulting directly or indirectly from or caused or contributed by (in whole or in part) any of the following:

ii. Any congenital conditions; or

iii. Any pre-existing diseases (as defined above)

iv. Intoxication by alcohol or narcotics or drugs not prescribed by a Registered Medical Practitioner.

The following are excluded under Major Stage Cancer:

I. Tumours showing the malignant changes of carcinoma in situ & tumours which are histologically described as premalignant or non-invasive, including but not limited to: Carcinoma in situ of breasts, Cervical dysplasia CIN-1, CIN -2 & CIN-3.

II. Any skin cancer other than invasive malignant melanoma

III. All tumours of the prostate unless histologically classified as having a Gleason score greater than 6 or having progressed to at least clinical TNM classification T2N0M0.

IV. Papillary micro - carcinoma of the thyroid less than 1 cm in diameter

VI. Microcarcinoma of the Bladder

Future Group’s, Generali Group’s and IITL’s liability is restricted to the extent of their shareholding in Future Generali India Life Insurance Company Limited.

For more details on this product including risk factors, terms and conditions, please read the sample policy document / brochure carefully and/or consult your Advisor and/or visit our website before concluding a sale.

Do you want to get physically and financially fit this financial year?