Sandeep, a 35-year-old advocate purchased a 10-year ULIP type-I with an annual premium of Rs. 1,20,000 and a sum assured of Rs. 12,00,000. The death benefit payable in this ULIP is higher than the sum assured or the fund value. In case of Sandeep’s sudden demise in the 5th year of the policy term, the death benefit entitled to the nominee would be higher than the fund value which is expected to have grown to Rs. 7 lakhs or the sum assured of Rs. 12 lakhs. In such a case, the nominee shall be paid a death benefit of Rs. 12 lakhs. There are many charges associated with a ULIP policy and Mortality charge is one of them. This risk of providing life cover is borne by the insurer in case of the insured’s unexpected demise, mortality charges are levied on the policy to cover this risk.

What is mortality charge in ULIP?

When an individual subscribes to a ULIP , the insurer levies a charge for insurance protection upon his death and to cover other expenses, known as mortality charge. It is usually deducted along with other charges, before investing the policyholder’s money.

Mortality charge is based on the sum at risk, i.e., the sum assured minus fund value. The sum at risk is the amount that the insurer has to pay from his pocket in the event of the insured’s death, and the charge ideally decreases with increase in the fund value during the policy term.

How is mortality charge in ULIP calculated?

Life insurance companies use mortality rate figures from the revised Indian Assured Life Mortality Table 2012-14, published by the Institute of Actuaries of India and prescribed by the IRDAI for calculation of mortality charges as given below: 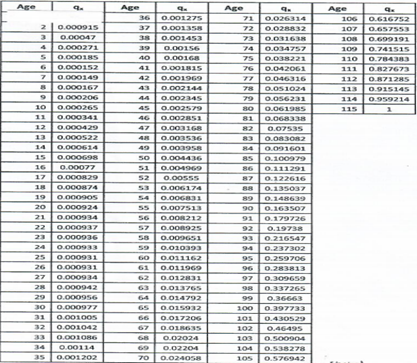 Here’s a sample illustration of the annual mortality charges applicable for Sandeep’ ULIP Type – I policy discussed in the beginning:

When shall lower mortality charges apply?

When a ULIP product is sold online, there is no need to pay a commission on purchase and this benefit is directly passed on the customer. Purchasing a ULIP online like the Future Generali Big Dreams Plan benefits the policyholder with relatively lower mortality charges. The plan is a systematic investment ULIP that provides a life cover along with the added benefit of wealth creation by promoting the habit of saving systematically over a long term through annual or monthly payment modes. The plan levies mortality charges on sum at a risk which is higher and (the sum assured less deductible partial withdrawal and 105 percent of premiums paid) minus the fund value of the policy. For female lives, the mortality charges are calculated on a 3-year set back on male lives, barring the ages between 0-9 years. So, mortality charges for a 30-year old female shall be that of a 27-year old male.